48 hours later, on Saturday, we had more blood work to make sure that everything was progressing as expected. They had cleared me to go on the trip back home to North Carolina for the weekend, IF I was without pain enough to not take the pain medications. If I had gone home, they would have delayed my bloodwork until Tuesday when I returned.

Oh, how grateful I am for the wisdom of my friend, Shaina. She helped me decide what was most important for me at that moment. Ultimately, I decided I just could not go. I did not think I could make it without the pain medications, and I was drained and weary. She helped me cancel my flights and file for reimbursement with trip insurance (which did not actually work, but I'm glad we tried).

Because I stayed, I went to get my bloodwork again on Saturday. Saturday afternoon my doctor called to say that my HCG had gone back up, and it needed to be going down. She assured us that this did not mean that the pregnancy had stabilized or was somehow okay, but that instead it meant that things were very wrong. We needed a lot of assurance in this area, because it felt like a glimmer of hope that maybe we weren't miscarrying. They answered all of our questions graciously, and we made an appointment first thing the next morning with the ultrasound specialist.

My biggest, most emphatic prayer was that at this appointment we would miraculously get to leave with an ultrasound of our precious little one. Yes, my heart hoped the doctors were wrong, and that there was a possibility that our baby was still living... but I wanted to be open to whatever the Lord was doing and trust that He was in control here.

In the morning, we went to the doctors, and they explained that we were going to need an ultrasound to hopefully see what was happening. They checked on my cyst and saw some remaining fluid, though it had lessened. The ultrasound was still fairly painful for me, and she explained that where I felt the most pain during that gave her information. She then showed me that she was able to find our baby in my fallopian tubes, which means that our pregnancy was ectopic. I immediately start sobbing, and not for the reasons she thought. I was just so thankful for the chance to see our little one, and she was willing to give us the picture (apparently this ultrasound picture is a very disturbing picture to any doctor, but to me it is my tangible memory of our little one). 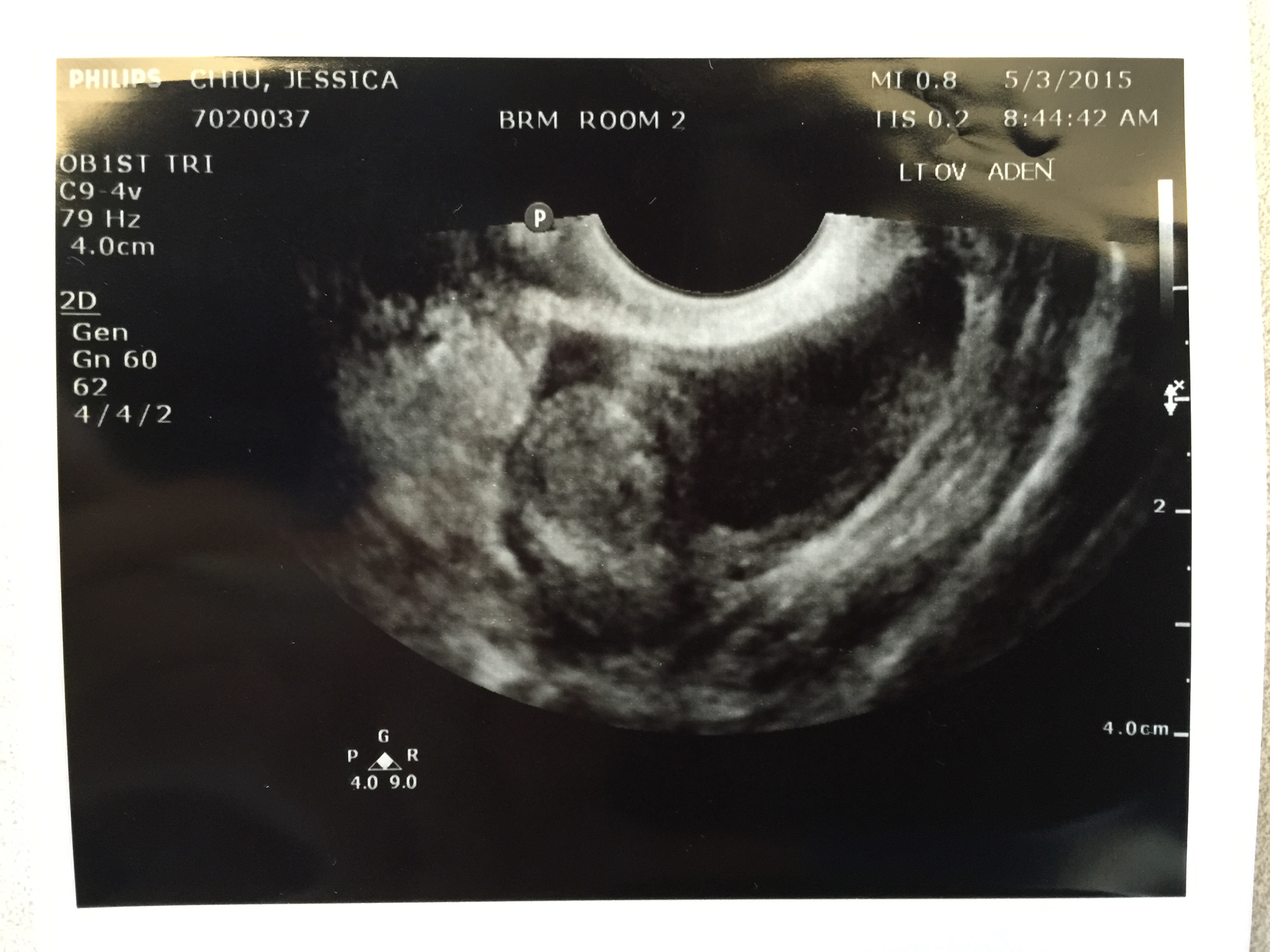 For those of you who don't know about much about an ectopic pregnancy, there is a major risk to the mother of the fallopian tubes bursting, since there is not room for the baby to grow. If the tubes burst, there is a major risk of the mother dying from internal blood loss. The ultrasound tech said that my continued pain was from my expanding tubes, and that they were on the verge of bursting. The doctor explained that there is no way to save an ectopic pregnancy - no way to move the baby to a safe place, no way to save it in any way. Our only options were to intervene in order to prevent the fallopian tubes from bursting and causing me significant harm. We were presented various options (a chemical injection, surgically removing the baby from the tubes, or removing both the tube and the baby). We asked if we could wait and let it miscarry on it's own, because all of those options seemed unfathomable to us. They were emphatic that we would be causing me harm if we did that, and the doctors were not willing to let us do that.

We were praying so hard for any other options. We began to move forward with the injection, as it was the least invasive option. Before we had the procedure, they had to do another round of bloodwork. As we waited for the results, they admitted me to the hospital and prepped me for the procedure.

Then, the doctors called to give us the results..... MY HCG HAD DROPPED SUDDENLY IN THE LAST HOUR! This allowed them to be comfortable allowing us to wait without going forward with the procedure. We had prayed for another option, and suddenly we had one. We could let this happen naturally.

Please understand, we were still grieved we were miscarrying, but I could not be more thankful for the way the Lord provided for us during this. He allowed our precious little one to hold on long enough for us to see them and get our much wanted ultrasound picture AND THEN he provided an outlet for us to not have to have medical intervention involved in ending our ectopic pregnancy. UNHEARD OF. I'm so grateful. Our doctors were very clear that if things didn't continue, we would still need to do this, but we knew that the Lord had it all under control.

I wish I could describe all the way God demonstrated his love for us through our friends and family during this process. We had people pray for us and with us. We had

This year's Brofest was a tough one for me. It was a continual tug of war on my heart, my mind, and my emotions. I was getting up early to go to the